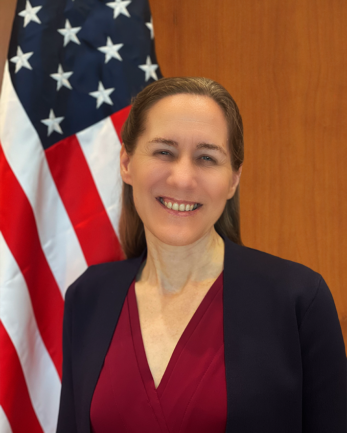 Kathryn “Katie” Kiser is the Deputy Chief of Mission (DCM) at the Embassy of the United States in Algiers, Algeria. Her most recent position was Deputy Principal Officer at the U.S. Consulate General in Erbil, Iraq.  Prior to Erbil, she served as the Deputy and then Acting Director of the U.S. State Department’s Egypt Office. Katie has also had assignments as the Embassy Tunis Economic Counselor; the Libya External Office Political/Economic Chief; the Egypt Desk’s Political-Military Officer; Cultural Affairs Officer in Lahore, Pakistan; Political Officer in Amman, Jordan; and as a Consular Officer in Osaka, Japan.

Prior to joining the Department of State, Katie worked as a teacher, a museum program coordinator, and a custom picture framer. She graduated from the University of Florida with a BA in Anthropology and Philosophy and holds an MA in Japanese Studies from the University of London’s School of Oriental and African Studies and an MS from the National Defense University’s War College. She is a continual student of Japanese and Arabic.