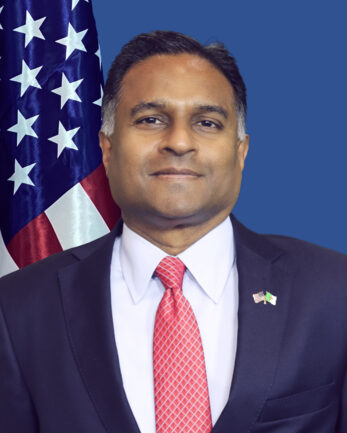 Gautam Rana is the Chargé d’Affaires ad interim (CDA) at the Embassy of the United States in Algiers, Algeria. He was the Chargé d’Affaires ad interim and Deputy Chief of Mission at the Embassy of the United States in Slovenia.  He served as a Director for Afghanistan and Pakistan at the National Security Council (NSC) from 2014-2015.  Prior to the NSC, Mr. Rana was the Deputy Minister Counselor for Political Affairs at the American Embassy in New Delhi, India.  From 2009-2010, he served as Deputy Secretary of State James Steinberg’s Special Assistant for South and Central Asia, the Middle East, and counterterrorism.  Prior to joining the Deputy Secretary’s staff, Mr. Rana was the Special Assistant to Assistant Secretary for  European and Eurasian Affairs Daniel Fried.

Mr. Rana served as the Political Advisor to the 4thBrigade Combat Team of the 101st Airborne Division in Khost, Afghanistan from February-July 2008, and as the Political Advisor on the Coalition Provisional Authority Governance Team in Mosul, Iraq from 2003-2004.  Mr. Rana’s overseas tours include Peshawar, Pakistan and Abu Dhabi, UAE and he covered Syria, Egypt and Jordan in the Office of Egypt and Levant Affairs as a desk officer.

Prior to joining the Foreign Service in 2002, Mr. Rana was a staff attorney with the Legal Aid Society in New York City, and a civil rights fellow with the National Asian Pacific American Legal Consortium.  Mr. Rana has varying levels of proficiency in Hindi, Gujarati, Spanish, and Arabic.  He has degrees in Economics and International Relations from the University of Pennsylvania, a law degree from Vanderbilt University, and a Master of Arts in Strategic Security Studies from the National Defense University.  Gautam is married, with two children.