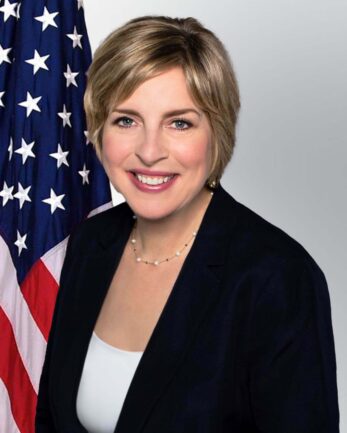 Elizabeth Moore Aubin was sworn in as the Ambassador for the People’s Democratic Republic of Algeria on December 21, 2021. Shewas a Senior Advisor for the Bureau of Near Eastern Affairs (NEA) from August-December 2021, and was the Acting Principal DeputyAssistant Secretary for NEA from August 2020- July 2021. Prior to that, she was the Executive Director of the joint Executive Office of theBureaus of Near Eastern Affairs and South and Central Asian Affairs.

Elizabeth has served in Washington D.C. as the Director for Human Resources for the joint Executive Office of the Bureaus of Near Eastern Affairs and South and Central Asian Affairs; a Special Assistant to the Under Secretary for Management; as a Post Management Officer in theWestern Hemisphere Affairs Bureau; as well as two tours on the Secretary’s staff; as a WatchOfficer and a Line Officer.

Elizabeth holds the rank of Minister Counselor. In 2022, she was awarded the Presidential Rank Award for Meritorious Service. She has a B.A. in Political Science from Barnard College, 1987.She has taken graduate courses in International Relations from Syracuse University’s MaxwellSchool of Citizenship and Public Affairs. She speaks fluent French. She is married to Daniel J.Aubin.