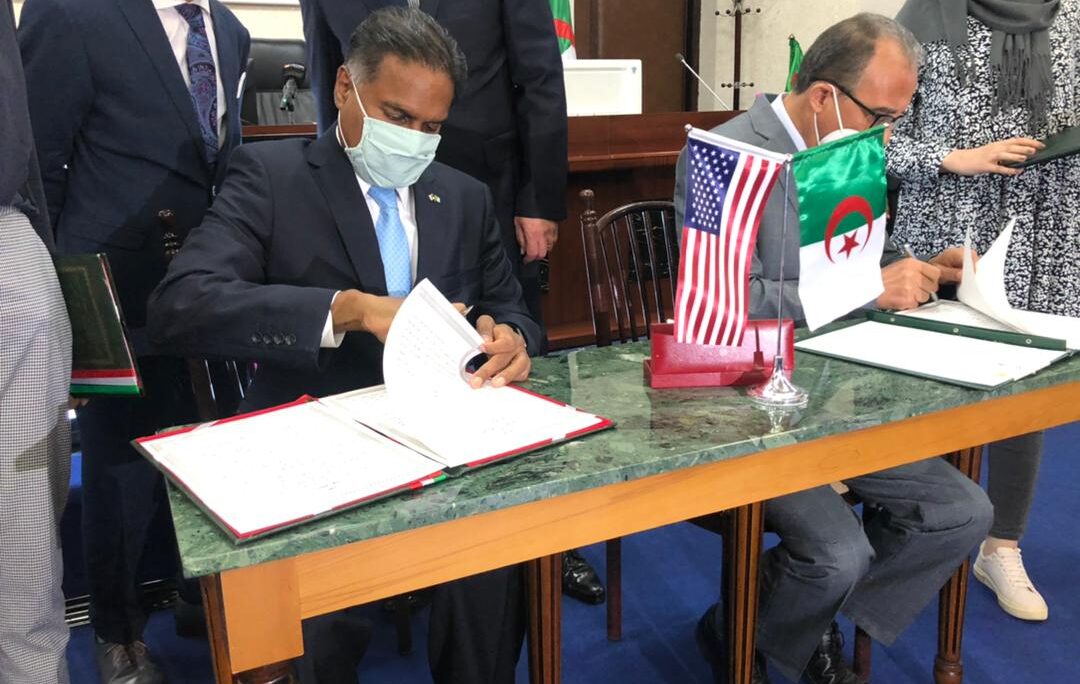 ALGIERS – On Wednesday, the United States Embassy in Algeria signed an agreement with the Ministry of Higher Education and Scientific Research that will transform the way Algerians learn English at universities and ultimately ensure that all Algerian graduates, professors, and researchers acquire the English skills they need to succeed.

“I am very pleased that the United States is collaborating with the Ministry of Higher Education and Scientific Research and Columbia University on this project,” Gautam Rana, Chargé d’Affaires of the U.S. Embassy in Algeria said during the signing ceremony.  “The goal of the project is admittedly ambitious: Its objective is to help put the Ministry on a path so that each student who passes through the doors of Algeria’s 107 universities will get the necessary exposure to English to ensure success in his or her chosen career.”

The three-year, $500,000 project will increase and improve the quality of English instruction in the fields of education, technology, and scientific cooperation at Algeria’s universities.

The plan centers on a partnership with the Teachers College of Columbia University in New York City, which is the oldest and largest graduate school of education in the United States, and whose experts have worked in over 100 countries on similar projects.

Specifically, the new agreement will put in place a long-term strategy for enhancing English in higher education in Algeria that includes developing a training program on how to teach English in science and technology and organizing joint workshops with Algerian English teaching experts.

This new program will complement the U.S. Embassy in Algeria’s other English language programs, which include exchange programs that send Algerian students to the United States; the Fulbright program for academics; and an intensive English course for disadvantaged young people.  One of the U.S. government’s top goals is to strengthen linkages between American Universities and their partners in the Middle East and the North African region, according to Chris Hodges, the Deputy Assistant Secretary for Assistance Coordination and Public Diplomacy for the State Department’s Bureau of Near Eastern Affairs.

“We promote English teaching not just as a language, but as a doorway to opportunity,” Hodges said in pre-recorded remarks that were broadcast at Wednesday’s signing ceremony.  “English has become the lingua franca of the academic and research communities and it is the key to continued U.S. and Algerian cooperation in many areas vital to our mutual interest.”